Bioplastics’ heralds the return of Micron Audio, the label founded by Drexcian innovator and Detroit electro legend DJ Stingray 313. Describing itself as “stepping not only further into the future but into the foreground”, while focusing on “clear scientific intention”, “political attitude”, “top-shelf sound design” and “pumping rhythms”, Micron Audio’s first releases will be Molecular Level Solutions, a new EP from the founder himself, as well as a highly-anticipated reissue of his 2012 album, F.T.N.W.O. ‘Bioplastics’ is taken from Molecular Level Solutions, a breakneck plunge through the roiling waters of Stingray’s singular sound, fusing clattering percussion and weaponised bass with the kind of glittering future soundscapes that are the producer’s speciality.

The track’s video is a collaboration between DJ Stingray and Iranian-Canadian visual artist Bahar Noorizadeh, who explores the twin histories of electro and Detroit’s industrial past, transforming their continuities into a sci-fi parable. “Techno commenced where the factory withered away,” she writes. “One person, one car: two diachronous beats. Automated selves reverberating to the rhythm of brakes, axles and engines, imagineering the assembly line across the walls (picture Chaplin in Modern Times.) What better narrator than the car – or cinema – to speak of a hundred or so years of aporia (picture Hal in Space Odyssey.)”

Casting the collapse of Detroit’s automobile industry as contemporary mythology, Noorizadeh explores the car as an unreliable narrator, a fly-on-the-wall of Detroit’s past, a first-hand witness of its’ fall and an unwitting thief of the city’s, and every city’s, uncertain future. “Wretched and utopian, the individual in charge of speed and scale, destiny and destination,” she continues. “The Teslaist dreams of conquest and connectivity expressed in CO2, or in effervescent sweat.” The synthetic textures of her glitched-out visual play out like the A.I. fever dream of a driverless car, as corrupted memories of automated factories spark up against snatches of archive footage of Detroit’s ravers, fragments of the city’s past sliced up as food for some unseen neural net.

Digitised heaps of rubble and broken buildings melt into warehouse interiors and tangled masses of wire, corrugated steel and cracked brick become the surfaces onto which a new sound is projected, a hallucinatory trip through the past to reckon with the realities of the present. “The derelict factory then is amplified in sound-waves,” writes Noorizadeh. “And now, the new heirs to those techno-hallucinatory assemblages: microorganisms, infectious agents, sunken meadows of seaweed. Oceans rise over mountains of carbon black tires. The car turned techno turns green: The earth wants to become earth again.”

‘Bioplastics’ is taken from Molecular Level Solutions, which is forthcoming on Micron Audio. For more information about DJ Stingray and his music you can follow him on Instagram. You can find Bahar Noorizadeh on Instagram and visit her website. 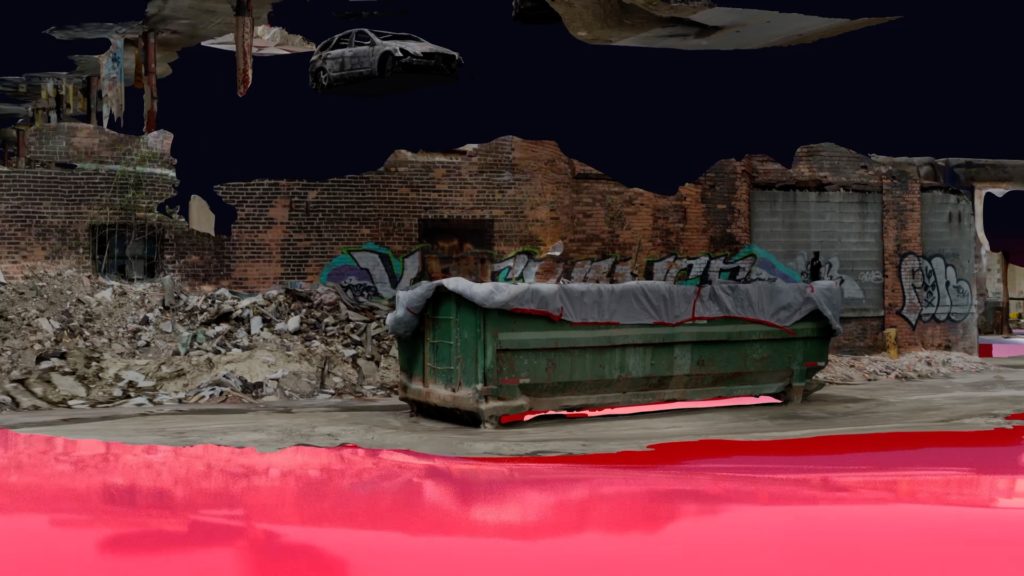